More than 4 years later, I still look at this blog and wonder what to write. I'm sure people have written off this space due to inactivity, but I'm still here. There are quite a few films that still need to be entered into The Horror Canon. I'll be posting new entries soon enough. If anyone is still checking this space, keep watching. It'll be awesome!
Posted by -Chris- at Friday, January 22, 2016 2 comments:

Ryne over at The Moon Is A Dead World has devised a plan so cunning so as to entertain us throughout the entire month of October.  It's called The Halloween Fifteen, and surely this is the "We Are The World" of the horror blogging community.  My humble part in this extravagant plot is to simply review the film Wolf Creek. 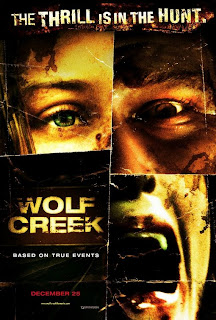 All told, Wolf Creek really is a simple story: Three adventure-hungry youths take on the isolated Wolf Creek Crater in Western Australia.  They become stranded there, far from anything remotely resembling civilization.  Help arrives in the form of friendly Australian gentleman, Mick.  As soon as Mick is trusted, it is revealed that he, well, should NOT have been trusted.

Director Greg Mclean is the captain of this ship.  He begins the film at a leisurely pace and let's things meander as we get to know the cast.  We see excessive pool partying, excessive drinking, and excessive flirting.  All this serves to introduce us to the 3 main leads: 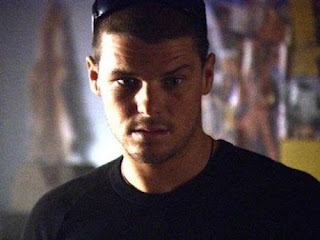 Ben, the confident yet sensitive city boy,
who may or may not have a crush on Liz. 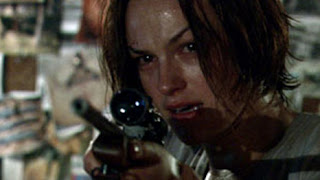 Liz, the resourceful and quick-witted life of the
party, who may or may not have a crush on Ben. 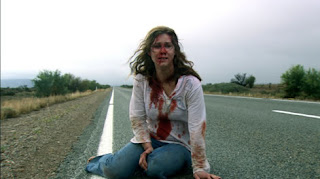 Kristy, the wet blanket/third wheel, who may or may
not be bitter that she's boyfriend-less on this outing. 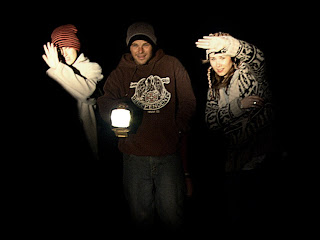 As the film progresses, we are treated to many Australian locales, from the suburbs to the highways, a hole-in-the-wall bar to the sprawling plains.  Visually there is a lot to take in, which is impressive considering the sparseness the film maker is trying to convey.  And once we get to the heart of the story, the film does a great job of portraying the middle-of-nowhere helplessness of the characters effectively.

I mentioned the slower pace of the first hour or so.  It's intentional, and never feels like the film maker was lost to what he was doing.  It was the right way to set this story up.  We spend time with these three characters, and we are able to identify and empathize with them.  By the time we see bad stuff happening to these good people we've spent enough time with them to feel that they deserve to survive this nightmare.

I won't go into all the intricacies of the story.  Watching how things unfold is half of the fun.  Having said that, the story is not what's important here.  The real meat of the film is in its performances, and misdirection of the audience.  Each cast member gives their all (with a slightly off-putting turn by the male lead toward the end) and is fairly believable in their reactions to their new found stress.  But the real star of the show is John Jarratt, who plays Mick.  He's fucking RELENTLESS: 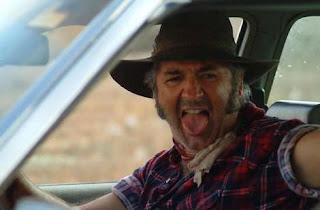 Geez, and this picture is from one of his more tame moments.  Mick can play friendly, menacing and creepy all in the same scene.  In scenes where he is in full on Crazy Mick mode, it's underlined by the fact that he is always in control of his actions.  Not once is he unaware of what is happening around him, and his actions are precisely calculated.  Mick is a hunter, and he does this to people because he can, plain and simple.  And that laugh of his is haunting...

There are several sly misdirections from the director. One precedes the 'head-on-a-stick' scene.  One happens toward the end on a lonely stretch of highway.  I don't want to give them away because they are pretty effective.  There are many scenes where the leads seem to be making progress and then things blow up in their faces.  It's the typical 'one step forward, two steps back' scenario, but it works well in this film and keeps the viewer unnerved.

At one point, this kind, old man shows up, but isn't really any help to anyone.  His intentions were pure, but let's just say he won't be attending the annual Gorton's convention this year... 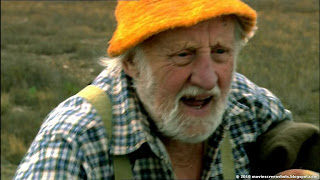 When all is said and done, the slow build first hour is a great set up for the bat-shit INSANE finale.  The movie poster claims this was based on true events, but I'm not aware of the supposed real life incident, so I can't comment on that.  What I do know is despite a bit of a weak ending, this movie will make you give pause the next time a stranger offers you help.

Here are a few things I took note of while watching the film:
-the travelling montage while not boring, is quite forgettable.
-the locals at the bar worked hard at making us hate them, but nothing came of it.
-'head-on-a-stick' is largely effective because Mick is explaining what he's doing to his victim.
-not only in America, but old men wear funny hats in Australia too (refer to above photo)
-only 5 cast members have names in this film, 19 actors are listed as "Pool Party People." 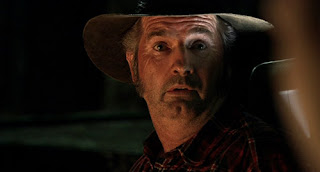 Wouldn't you trust him?  He seems harmless enough, doesn't he?  (WARNING: If you answered 'Yes' to either of these questions, it is very likely that you have been, or will be, one of Mick's many victims)

The Victim Tally Of Jason Voorhees

It's no secret I love the Friday the 13th films. I saw this graphic at Zombots and just had to have it. It didn't say who originally designed it, so I can only give credit to my source. Feel free to steal it from me, and maybe the designer will come forward so we can all shower him/her with adoration. 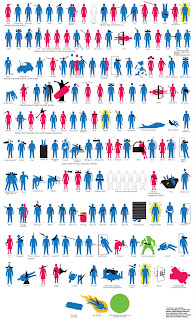 The only movie in the Friday the 13th series to not say the name "Jason" is: 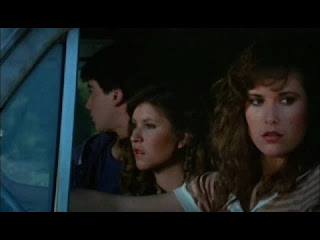 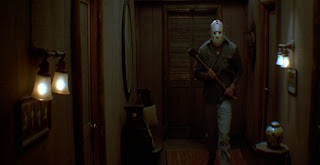 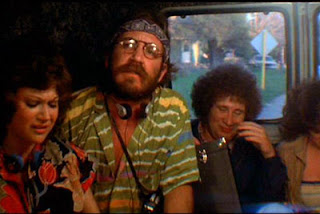 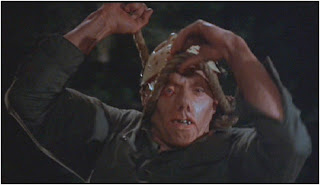 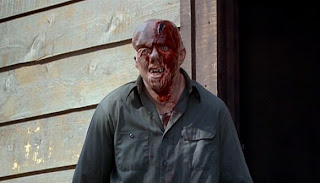 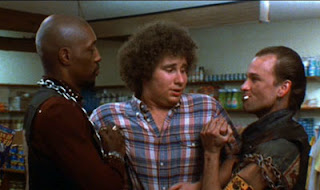 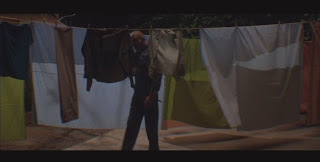 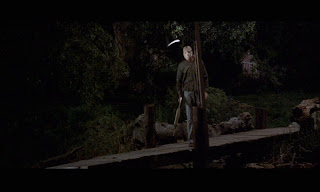 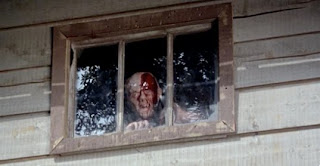 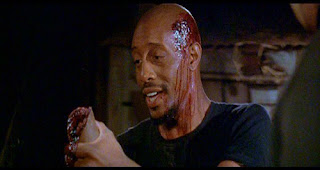 Friday the 13th Part 3
I know Ginny says his name in the flashback to part 2, but I think it's kind of neat that they never use his name in the movie proper. I wonder if the film makers were trying to make Jason seem more like a "boogey man" by doing this.
Who knows?!
Posted by -Chris- at Thursday, July 28, 2011 No comments:

I bought this little bluray disc a while back. Maybe you've heard of it. Here's the front cover: 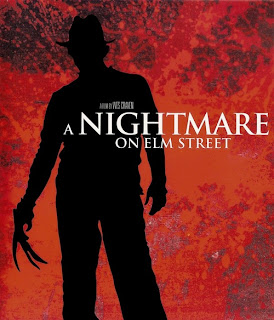 Of course, I've seen A Nightmare on Elm Street many times, so this was promptly added to my collection shelf without a viewing...
where it sat...
for a long time...
until tonight.
I grabbed the disc from the shelf and threw it in the player. As the film loaded, I amused myself by reading the back of the movie case. And let me tell you, sir or madam, I was embarrassed by what I read: 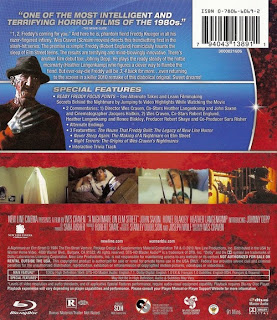 You may not be able to read the tiny text, so I'll also type it out for the ease of your tired eyeballs.
"1, 2, Freddy’s coming for you." And here he is, phantom fiend Freddy Krueger in all his razor-fingered infamy. Wes Craven (Scream movies) directs this trendsetting first in the slash-hit series. The premise is simple: Freddy (Robert Englund) homicidally haunts the sleep of Elm Street teens. The results are terrifying and mind-blowingly innovative. There’s another film debut too: Johnny Depp. He plays the ready steady of the hottie mcsmarty (Heather Langenkamp) who figures a clever way to flambé the fiend. But ever-say-die Freddy will be 3, 4 back for more…even returning to the screen in a killer 2010 remake of this diabolical original. Sweet dreams!
I guess with a movie of this reputation you don't need to try real hard to synopsize the story, but come on. Try a little bit. I wasn't only embarrassed for the person who wrote it, but for myself. I thought someone was going to come along and ask me what I was reading, and I would have to tell them. And they would laugh at me.
So, I guess there is no real point to this post, other than to preempt the person who sees me reading this bluray cover. Then I can refer them to this little corner of the interwebs and say "I agree with you. That movie synopsis sounds silly."
Posted by -Chris- at Thursday, July 28, 2011 No comments: 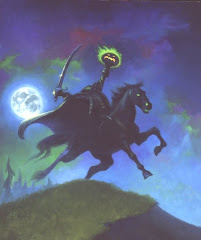 -Chris-
I live in New England. Finally getting to see a movie you've been waiting for is awesome. I like to be scared. Pizza goes with movies at home, while Twizzlers goes with movies at the theater. People are funny to watch. Being outdoors is nice. Movies about things that could really happen are generally boring, while movies about things that could never happen are generally entertaining. I don't travel nearly as much as I would like to. New England is wicked awesome. 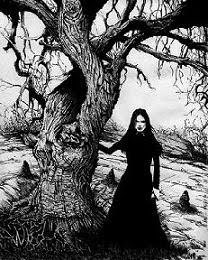 A Brush With Genius! 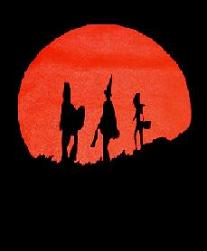 What People Have Been Reading...

Where Are You From?